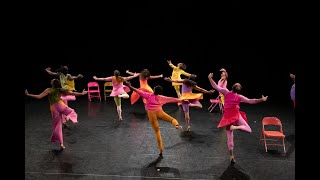 An Evening of Dance to the Music of Burt Bacharach

“For many years, I’ve wanted to see my music reimagined in some kind of theatrical production – not just a jukebox musical formula of songs, but an original work with its own story and appeal. I’ve found an ideal collaborator in Mark Morris, whose brilliant choreography and deep musicality give songs new meaning and dimension through movement. Like a great melody, his dances evoke an atmosphere and inspire feelings, and I think that’s just what the world needs now. I’m excited to see how Morris and his creative team bring my songs to the stage in The Look of Love.” — Burt Bacharach

Stay for opening night, then party the night away! Learn more about The Look of Love: A Celebration
BroadStage - Main Stage

Following the roaring success of his Beatles tribute Pepperland, Mark Morris teams up again with musical collaborator Ethan Iverson (The Bad Plus) for The Look of Love, a wistful and heartfelt homage to the chart-topping songs of Burt Bacharach. A towering figure of popular music, Bacharach is known for his soaring melodies and unique orchestrations influenced by jazz, rock, and Brazilian music — his longtime lyricist Hal David providing unsentimental, poignant lyrics.

This evening-length work features original choreography by Morris, costumes by Isaac Mizrahi, and new musical arrangements by Iverson, performed by an ensemble of piano, trumpet, bass, and percussion, with singer, actress, and Broadway star Marcy Harriell on lead vocals.

Stay for opening night, then party the night away! Learn more about The Look of Love: A Celebration here.

Mark Morris has been praised as “the most successful and influential choreographer alive, and indisputably the most musical.” (New York Times). In addition to creating over 150 works for the Mark Morris Dance Group, he conducts orchestras, directs opera, and choreographs for ballet companies worldwide.  Morris’s work is acclaimed for its ingenuity, musicality, wit, and humanity. Named a Fellow of the MacArthur Foundation in 1991, he has received eleven honorary doctorates to date, and a multitude of awards, including the Samuel H. Scripps/American Dance Festival Award for Lifetime Achievement, the Leonard Bernstein Lifetime Achievement Award for the Elevation of Music in Society, the Benjamin Franklin Laureate Prize for Creativity, the Cal Performances Award of Distinction in the Performing Arts, the Orchestra of St. Luke’s Gift of Music Award, and the 2016 Doris Duke Artist Award. In 2015, Morris was inducted into the National Museum of Dance in Saratoga Springs, New York. Morris’s memoir, Out Loud, co-written with Wesley Stace, was published in paperback by Penguin Press in October 2021.

Ethan Iverson, pianist, composer, and writer, first came to international prominence as a founding member of The Bad Plus, a game-changing collective with Reid Anderson and David King. The New York Times called TBP “Better than anyone at melding the sensibilities of post-60’s jazz and indie rock.” During his 17-year tenure, TBP performed in venues as diverse as the Village Vanguard, Carnegie Hall, and Bonnaroo; collaborated with Joshua Redman, Bill Frisell, and the Mark Morris Dance Group; and created a faithful arrangement of Igor Stravinsky’s The Rite of Spring and a radical reinvention of Ornette Coleman’s Science Fiction. Since leaving TBP, Iverson has kept busy. In 2017, he co-curated a major centennial celebration of Thelonious Monk at Duke University and premiered the evening-length Pepperland with the Mark Morris Dance Group. In 2018, he premiered an original piano concerto with the American Composers Orchestra and released a duo album of new compositions with Mark Turner on ECM. In 2019, he released Common Practice with Tom Harrell on ECM, standards tracked live at the Village Vanguard. In 2021, he released the big band work Bud Powell in the 21st Century and was featured on the March cover of DownBeat. In 2022, he released Every Note is True on Blue Note records, an album of original music with Larry Grenadier and Jack DeJohnette. Iverson has also been in the critically-acclaimed Billy Hart quartet for well over a decade and occasionally performs with elder statesmen like Albert “Tootie” Heath or Ron Carter or collaborates with noted classical musicians like Miranda Cuckson and Mark Padmore. For almost 20 years, Iverson’s website Do the Math has been a repository of musician-to-musician interviews and analysis. Time Out New York selected Iverson as one of 25 essential New York jazz icons: “Perhaps NYC’s most thoughtful and passionate student of jazz tradition—the most admirable sort of artist-scholar.” Iverson has also published articles about music in The New Yorker, NPR, The Nation, and JazzTimes.

Burt Bacharach is one of the world's most acclaimed, award-winning composer/songwriters. His music is as diverse as his audiences, spanning generations and continents, as he is celebrated both as a pop culture icon and one of the world’s greatest contemporary composers. Bacharach’s credits read like the world’s favorite radio stations’ playlist:  “Alfie,”  “Arthur’s Theme,”  “Close To You,” “Do You Know The Way To San Jose,”  “I Say A Little Prayer,”  “I'll Never Fall In Love Again,” “This Guy’s In Love With You,” “Walk On By,” “What The World Needs Now Is Love,” and “Wishin' And Hopin’” are among just the 48 Top 10 hits, nine #1 songs. Bacharach and Hal David were the recipients of the 2012 Library of Congress Gershwin Prize for Popular Song. The prize is awarded to musicians whose lifetime contributions in the field of popular song exemplify the standard of excellence associated with the Gershwin’s. Bacharach and David received the Library’s Gershwin Medal in May, 2012 at an all-star tribute in Washington, D.C. Bacharach’s memoir “Anyone Who Had a Heart,” was released in May, 2013. For the first time in his long and astonishing career, Bacharach tells his story of love, heartbreak, success, failure, and unbridled ambition in “Anyone Who Had a Heart.” “Anyone Who Had a Heart,” is named after one of many songs Bacharach and David wrote for Dionne Warwick. The memoir was published by HarperCollins. Bacharach composed his first film score in 16 years for John Asher’s autism-based drama film Po. The film was released in April, 2016. Po tells the story of a recently widowed father struggling to raise his 10-year-old son who has autism. Bacharach and Daniel Tashian released two new songs called “Moon Over Wichita” and Heartbreak Storms” via Big Yellow Dog Music in April, 2022. The songs are a continuation of their GRAMMY nominated ‘Blue Umbrella’ EP, released in 2020, and ‘Blue Umbrella (The Complete Recordings),’ which was released in 2021 and featured four never-before-heard songs. Bacharach and Steven Sater's Some Lovers, featuring vocal performances from some of Broadway's most beloved co-stars was released on November 26, 2021. The album was nominated for a Grammy Award for Best Musical Theater Album. The 64th Annual Grammy Awards were held in April, 2022.

Hal David (1921-2012) is known for his award-winning lyrics that have been featured in films, Broadway shows, and music charts throughout his career. Being honored through numerous Grammys, the NARM Presidential Award, and more, he is most known for his collaborations with composer Burt Bacharach whom he met in 1957. The two wrote their first hit, "The Story of My Life", and then continued to write iconic American pop songs throughout the 1960s and 70s. In 2012, David and Burt Bacharach received the Gershwin Prize for Popular Song. But the duo was not just known for the pop songs they created, they also wrote for movies, four of their songs being nominated for Academy Awards: “What’s New, Pussycat?,” “Alfie,” “The Look of Love” and “Raindrops Keep Fallin’ on My Head.” “Raindrops Keep Fallin’ on My Head” also won an Oscar in 1970. Lincoln College bestowed a Doctor of Music degree on David for his contribution to American music. In October of 2007, David received an Honorary Degree from the Five Towns College in Long Island, and in addition, they named their new Music Library building "The Hal David Music Library." David is a member of the Nashville Songwriters Hall of Fame and was the first non-British person to receive the Ivor Novello Award from the British Performing Rights Society.

Marcy Harriell is a singer, actress, and writer. Her ability to embrace diverse vocal styles, coupled with her unquestioned passion, has made her a unique standout in New York theatre. Jumping lithely among opera, rock, music theater, and R&B, the New York Post declared this “wildcat kitten” a “star in the making,” while the New York Times hailed her as a vocalist who “demolishes the furious torch song” with a “rafter rattling intensity.” She is best known for her appearances on Broadway, starring in the Tony Award winning musicals In the Heights and Rent, and as the host of the fashion series Re:Fashion on TN Marketing's Craftsy. On television, Harriell has been a Series Regular on NBC's Ed, HBO's Nurse Jackie and the CBS courtroom dramedy Queens Supreme. She has been a guest star on numerous television programs, including: NCIS, Law & Order, Elementary, Royal Pains, Beauty & the Beast, Gone and Search Party. In 2006, Harriell auditioned for the Quentin Tarantino film Death Proof. Mr. Tarantino was so intrigued by Harriell's "southern boy" characterization, that he rewrote the part specifically for her and renamed the character Marcy. In 2013, Lin-Manuel Miranda recruited Harriell to help him record demos of his songs for the Disney animated motion picture, Moana. Harriell's outtakes of the songs "More" and "More (Reprise)" were included on the soundtrack. Harriell plays Molly's mother in the 2019 motion picture Men in Black: International. Among her many singing engagements, Harriell is a regular with the tribute project Loser's Lounge, created by Joe McGinty. With The Losers, Harriell has performed at Joe's Pub, City Winery, Lincoln Center and the Montclair Film Festival.

Issac Mizrahi has worked extensively in the entertainment industry as a performer, host, writer, designer, and producer for over 30 years. He has an annual residency at Café Carlyle in New York City and has performed at various venues across the country such as Joe’s Pub, The Regency Ballroom, and several City Winery locations nationwide. The New York Times noted, “he qualifies as a founding father of a genre that fuses performance art, music, and stand-up comedy.” He is the subject and co-creator of Unzipped, a documentary following the making of his fall 1994 collection which received an award at the Sundance Film Festival. He hosted his own television talk show The Isaac Mizrahi Show for seven years, has written three books, and has made countless appearances in movies and on television. He served as a judge on Project Runway: All-Stars for the series’ entire seven-season run. Mizrahi has directed productions of A Little Night Music and The Magic Flute for the Opera Theatre of St. Louis. Annually, he directs and narrates his production of the children’s classic Peter and the Wolf at the Guggenheim Museum in New York. Mizrahi has his own production company, Isaac Mizrahi Entertainment, under which he has several projects in development in television, theatre, and literature. His New York Times Bestselling memoir, I.M., was published in February 2019.

“Morris taps both our most primal and our most sophisticated responses to music. That’s not the only reason he has been recognized since the 1980s as one of the very few great choreographers of our day — there are also his exceptional imagination; his phenomenal wit; the profundity of his view of society; his insistence on live music; and his exceptionally honest, natural dancers — but it’s fundamental.” — The New York Times

In honor of Isabelle Stevenson